It is so easy to get caught up in the routine wheel of life, repeating the same thoughts, feelings and actions again and again and again. Wouldn’t it be wonderful if each of us, in our own way, could tap into our “innate explorer” and break through to the other side? There we would discover the huge potential that is our birthright, ours to claim.  In essence, I see all of us as circles yearning to be lifted up and transformed into spirals of living splendor, into a state of being that would allow us to fully express our creativity in

our own unique way as a Divine Being on this planet.  This is possible because all life is sacred and all of creation exists as an expression of the Divine within our matrix.  The irrefutable beauty and design of our existence can be seen in the mathematical patterning that oozes out of the intelligence behind creation.  It is a sequencing of numbers that ultimately reveal themselves as solid forms.  It is known as Sacred Geometry.

All matter–the mineral kingdom, the plant kingdom, the animal kingdom and humanity itself, which is just an advanced expression of a life form—is part of the Sacred Geometry of life’s evolution.  As comfortable as repeating the old ways may seem, nature itself is yearning to evolve. 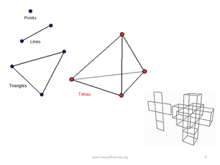 We live in a three-dimensional world for the moment, but we are evolving into becoming fourth and fifth dimensional beings. The best way to describe what will be our new reality is if you can imagine a state of being where everything is here at once and everything happens simultaneously.  Imagine a place where thoughts become manifest instantaneously and a place where the miraculous becomes commonplace. Imagine a state of being where our loving nature is a given and we have a mindset where the innernet replaces the Internet.  Imagine a world in which we can potentially communicate with anyone instantaneously and teleport our bodies anywhere in the Universe.  Can you picture that?  That is what the future holds.

All this is inevitable. The circle becomes the spiral that can travel through the dimensions in all of God’s Creation.  It is for this reason the study of Sacred Geometry is so vital. By studying the repeating mesmerizing patterns that occur in nature, we come to see the Grand Design and to understand that It is our birthright and our destiny to raise ourselves up out of our current state. As we go through this process we also will recognize the significance of cultivating our Sacred Body.

The Cosmos is waiting for us to come on board.

Once we commit to do whatever it takes for our personal growth, we can harness the unlimited potential of the Earth that we stand on, the Prana that we breathe, and the sun, our solar generator, that continually showers our bodies with light energy.

Once we totally open ourselves up to the unfathomable strength behind the infinite potential of a loving God whose intelligent patterns created our Universe, once we realize we are one with our creation, we will become an expression of the Divine in all its glory. And ultimately, we will break free of our self-imposed and imagined limitations in order to become pro-active agents of the Creator itself in all its multiplicities of expression. ~Samuel Kiwasz